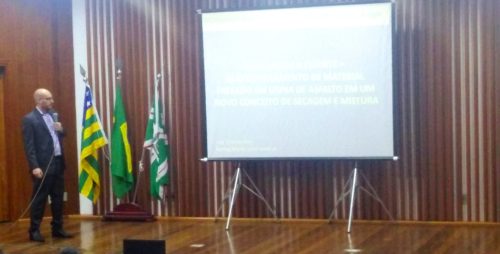 Engeneering Vinicius Reis during  his lecture at AGETOP

BOMAG MARINI was present in one more edition of Roads Workshop, held by AGETOP (Agency of Transport and Works from Goiás). In the 7ª edition, the Workshop occurred between August 21th and 22th, at Agency’s auditorium. During the Workshop, were addressed important issues of road segment for Brazilian market, in addition to stand with machinery exhibition, BOMAG MARINI was also present in a lecture, in August 21th, given by BOMAG MARINI Product Designer, engineering Vinicius Reis, about hot recycling –   Reuse of asphalt milling material in a new mixing and drying concept, where was addressed important issues as RAP: how is extracted, solutions for extraction, process and use, highlighting to MARINI Latin America asphalt plants, that had process capacity up to 30%, the bigger percentage of RAP use in Brazil. Therefore, the vantages and benefits of TITANIUM System also were showed, and the new asphalt plant series CARBON T-BOX, which brings differentials, that are able to revolutionize the future of asphalt plants.